RTV Engineering has built a solution leveraging RF Controls’ overhead reader and antenna system to track the locations of a manufacturer’s bins of materials as they are stacked seven bins high on metal racks, thereby enabling the company to know where its components and materials are located in real time.

RFIDJournal, Sep 6, 2019 – RFID solutions company RTV Engineering has built a system that is being piloted by a manufacturing company to identify, locate and track, in 3D, the locations of bins stacked on two rows of metal racks facing each other across an aisle in real time, using passive RFID. The manufacturer has asked to remain unnamed. The system allows the company to identify where particular bins are located within a few feet, and to thereby better understand its inventory of assets and supplies, as well as where they can be found and when they need to be replenished. 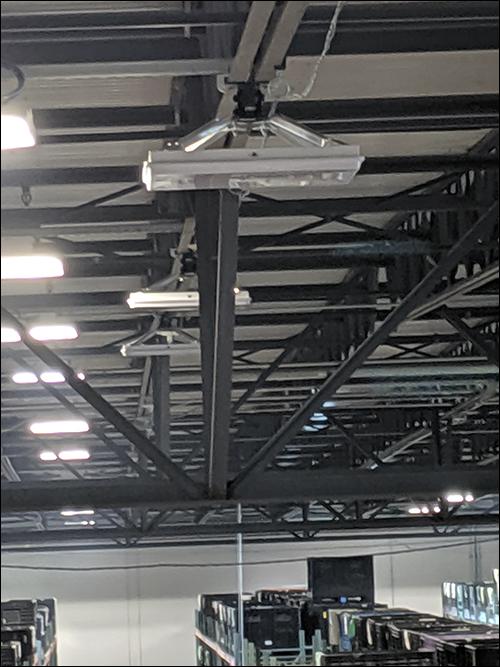 RTV is a systems integration company located in Cheyenne, Wyo., under leadership that has a long history with active RTLS and RFID. Veiga originated at Savi Technology and Lockheed Martin as a systems engineer and a senior technical sales manager before launching RTV in 2010. Joe Leone, who recently left Lowry Solutions after building its Sonario IoT platform, also has a deep background with RFID, including work at Savi. He joined the RTV team six months ago to develop the company’s Site Director middleware platform that would enable the quick integration of RF Controls’ hardware and operating system with an RTV enterprise solution.

Most of the company’s customers are large manufacturing facilities with challenging use cases, Veiga says. “We tend to get the more complex jobs,” Veiga states, for which standard RFID solutions may not work. The latest such project—the first RTV installation to employ RF Controls readers—consists of tracking supplies as they are shelved, stored and consumed by a global manufacturer.

The system is being piloted with 200 of the company’s 15,000-plus material bin storage compartments at a single test area within the warehouse. Two rows of racks face each other across an 11-foot-wide aisle. They extend 75 to 100 feet in length and can be as much as 28 feet in height. Most of the bins stored in those racks measure 48 inches by 44 inches. Once the pilot is completed this fall, the solution may be expanded to other facilities around the world.

RTV focuses on providing its customers with turnkey solutions that can be easily deployed, with computing accomplished at the edge. “We use real-time, event-driven data to make time-sensitive decisions,” Leone says, which can enable companies to trigger a PLC to respond to sensor data, or to generate events based on an item’s location. What is being tracked can vary from small components and materials, bins and totes to large rolls of coiled steel and tanker trucks.

In the case of the manufacturer tracking its raw materials, RTV was brought onboard to solve a problem that other RFID deployments had failed to address: effectively tracking the locations of materials at the item level as they are stored and then used during manufacturing. The firm had looked into other passive RFID systems but found them lacking. Standard passive RFID reader portals, for instance, can track when tagged goods passed through those portals and thereby identify the general zone in which an item was moving. But the company wanted to do better than that—it sought to know the specific aisle in which each bin of material was transported.

The firm did not want to invest in an active RFID system with battery-powered tags, however. RTV thought it could do better than merely identifying the aisle in which each bin was located. It brought in RF Controls for an overhead passive RTLS solution. “If people are still looking at fixed point [portal] reader technology, you’re back in the 20th century,” Veiga states. “The technology has moved on.” He first witnessed RF Controls’ readers in use at the 2018 RFID Journal LIVE! event, he says, and was impressed that the passive RFID-based RTLS could help it to serve its customers.

Therefore, RTV and RF Controls set up a pilot with the manufacturer, with the aim of providing an end-to-end solution that indicated not only the aisle or rack, but also the specific compartment on a rack in which each bin was located, with 95 percent put-back accuracy. The conversations for the pilot started about a year ago, but actual development work didn’t begin until about five months later. The company then provided a business-analysis process before deploying the solution.

RTV was already experienced with large manufacturing sites and warehouses, such as the one it was working with during the pilot. Its other customers’ facilities are often millions of square feet in size, with a ceiling height of 25 to 50 feet. The space near the ceiling can be crowded; for instance, gantry cranes may be travelling down bays and sections of warehouses, making it challenging to install overheard RFID readers. “You can’t hang an antenna below where the gantry crane will be,” Veiga explains. In fact, the manufacturer conducting the pilot has a ceiling height of approximately 34 feet. “RF Controls is the only passive RTLS solution I’ve seen that can trace assets at those heights with that level of accuracy.”

The technology, if required—using overlapping scan areas from two antennas—also provides 3D location co-ordinate data so that the manufacturer can understand how high on a rack a tagged items is being stored. “Most [RFID systems] offer X and Y positioning,” Leone says, “but RF Controls gives us X, Y and Z.” For the deployment, RTV installed five RF Controls CS-445B Smart Antenna units—each with a built-in reader and phased-array antennas—to cover a 100-foot aisle. A variety of tags were tested, such as those from Confidex and Omni-ID, as well as Metalcraft tags, each attached to a plastic or metal bin or tote.

The Site Director software, residing on a local server, was programmed to identify, locate and track each tag in 3D within each of the shelf bin compartments, which are stacked seven layers up. As a tagged item passes down the warehouse aisle, the UHF RFID tag’s ID number, linked in the software to the material stored in the tote or bin, is captured by the reader antennas. That ID, along with the calculated location, provided by RF Controls, is continuously sent to the software as it moves.

As the item is put away in one of the rack compartments, the reader antenna continues reading the tag and its new status is updated in the software. After several months of piloting the technology, Leone reports, the company is now close to gaining 95 percent put-away location accuracy and 100 percent inventory accuracy.

The RF Controls reader’s bi-directional steerable phased array antenna emits a single beam of energy, as opposed to similar overhead UHF RFID readers that employ numerous antennas in a single device (or connected to that device). A single antenna can switch between circular, horizontal and vertical polarization, according to Adrian Turchet, RF Controls’ senior VP of strategy and corporate development.

Because the reader can accomplish a long read range, RTV was able to suspend it from the ceiling at a height of about 32 feet, near the lights, where it will not interfere with cranes or other equipment. From that height, the firm found that the manufacturer can pinpoint a tag’s location within about 10 inches using a single antenna. The CS-445B reaches a maximum of 45 feet, which allows antennas to be mounted straight down or at an angle. RF Controls also offers a larger antenna that offers a maximum read distance of 75 feet for higher ceilings.
RF Controls’ Adrian Turchet

In a typical wide-open space, the passive RTLS reader antenna, when mounted at 30 feet, would be able to cover a 3,600-square-foot scan area, assuming no obstructions. Leone says the manufacturer raised its expectations once it understood what the system could provide. “We’re victims of our own success,” he states, adding that the company thus shifted the goal post. “Once we turned it on, they brought in their international leadership group,” Leone says, to consider how the technology could be used enterprise-wide. For instance, passive UHF RFID could be utilized to locate tools, as well as raw materials, through an assembly floor at sites around the world.

The system would work with fewer than five antennas per 100-foot aisle, Veiga adds, but the company chose the relatively large number due to the high presence of metal, including on forklift trucks, scissor lifts and metal racks, and to reach 100 percent accuracy with 3D coverage. “We could get higher accuracy by adding a couple more antennas,” he says, but that may provide more accuracy than the company requires. At about 85 percent accuracy, its personnel can be assured that if the bin they seek is not in the identified compartment, it will be in the one next to it.

“This is one of the most aggressive environments I’ve ever worked with,” Veiga reports, “and to have that level of location accuracy with five antennas is remarkable.” RTV Engineering is currently in conversations with other potential customers for asset or inventory management deployments leveraging RF Controls’ readers. Those customers include a variety of manufacturers.

Link to original article in RFIDjournal